A modular unit encompasses all the domestic functions of this Catalonian guest apartment by architecture studio Aixopluc, leaving the rest of the floor plan empty for inhabitants to use as they wish.

Aixopluc’s Alfondac guest apartment is situated in the Catalonian city of Reus in the Raval de Santa Anna neighbourhood. 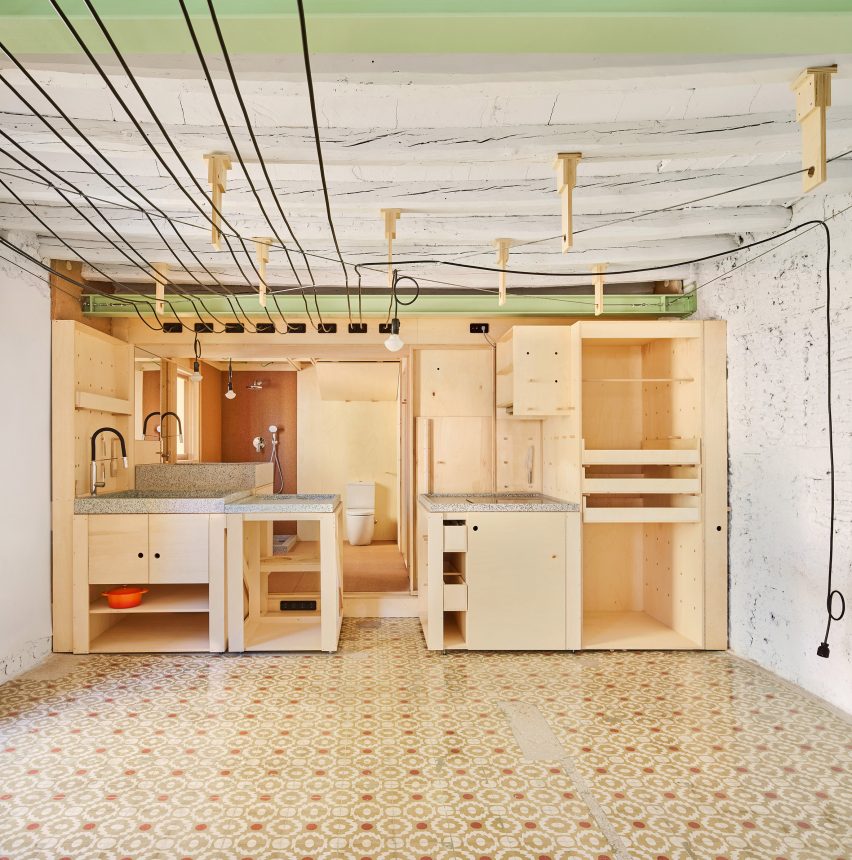 The 55-square-metre space takes over a former photographer’s studio that’s in the same building as Aixopluc’s workshop. When the photographer retired, the studio sat vacant for two years with its interiors gradually deteriorating.

“We decided to repair the place hoping someone might be interested in renting it,” explained the practice. “It was not clear whether it would be more successful as an apartment or an office – so we decided to do more than both.” 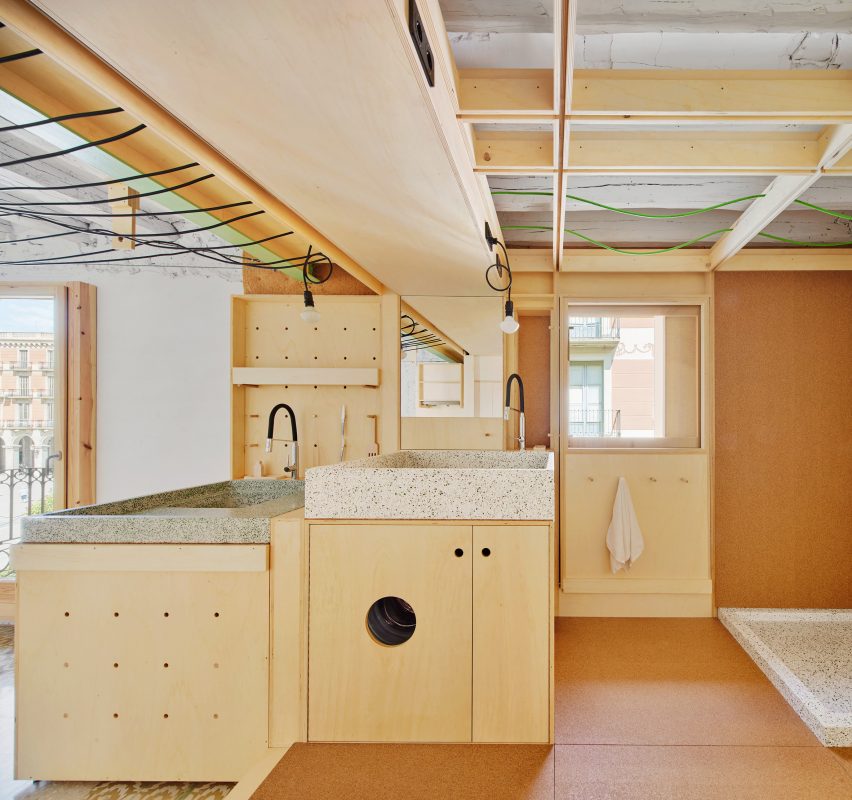 The practice decided to trial its modular domestic furnishing system called Homeful, which is designed to be quickly and cheaply incorporated into abandoned buildings so that they can become habitable again.

The system comprises three elements: storage cupboards, a small house-shaped volume that accommodates a bed and a series of panels – which the practice refers to as “enclosures” – that can be used to form walls, floors, ceilings and doors.

These can be easily assembled or dismantled by hand using standard DIY tools. 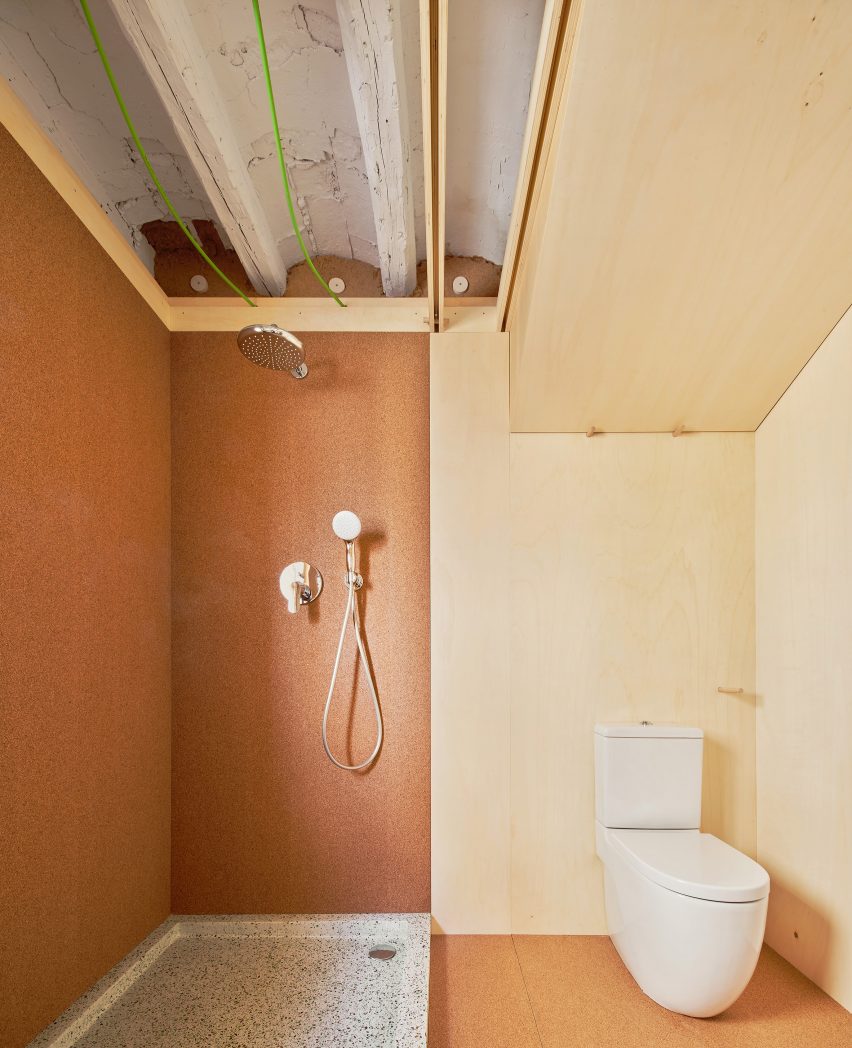 The system is ideally meant to be compactly built into the smallest corner of any given space, leaving a majority of the floorplan free for inhabitants to use as they wish and “welcome unpredicted life”.

In the case of Alfondac, Aixopluc hopes that young professionals who stay there will use the open space as a workspace.

“By concentrating the efforts in a high-dense disposition, the services and material costs will be minimised, and the space available for the inhabitants to transform as they see fit is maximised,” explained the practice. 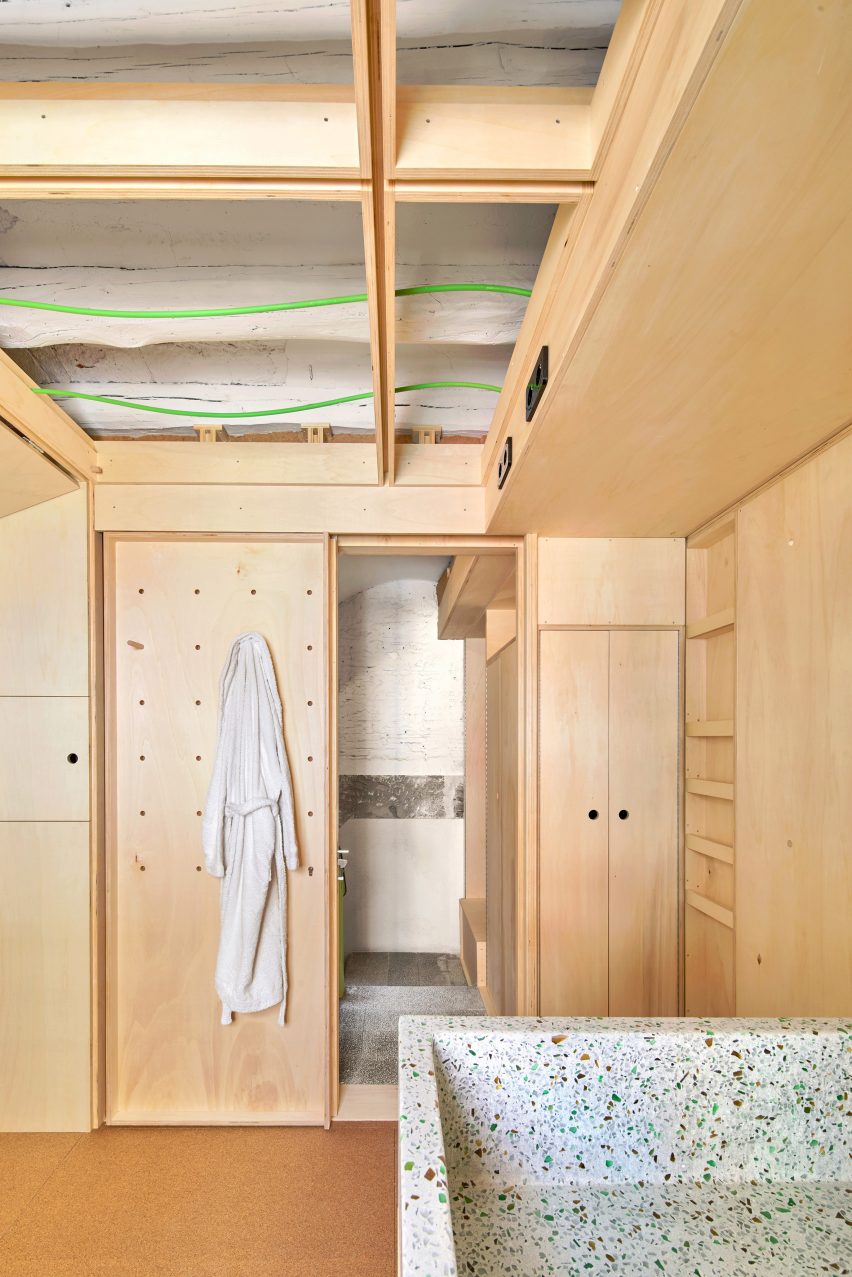 By amalgamating different functions into one unit, the practice also thinks that the Homeful system offers a way to create “unexpected relations” between living spaces that are traditionally separated in the home.

“This iteration is an exploration of the potential benefits of having different activities and their smells – shit, lavender soap, pee, escudella, incense, linen sheets after sex, hyacinth flowers, baby’s poo and half-full glasses of Priorat wines – coexist rather than being segregated,” the practice added. 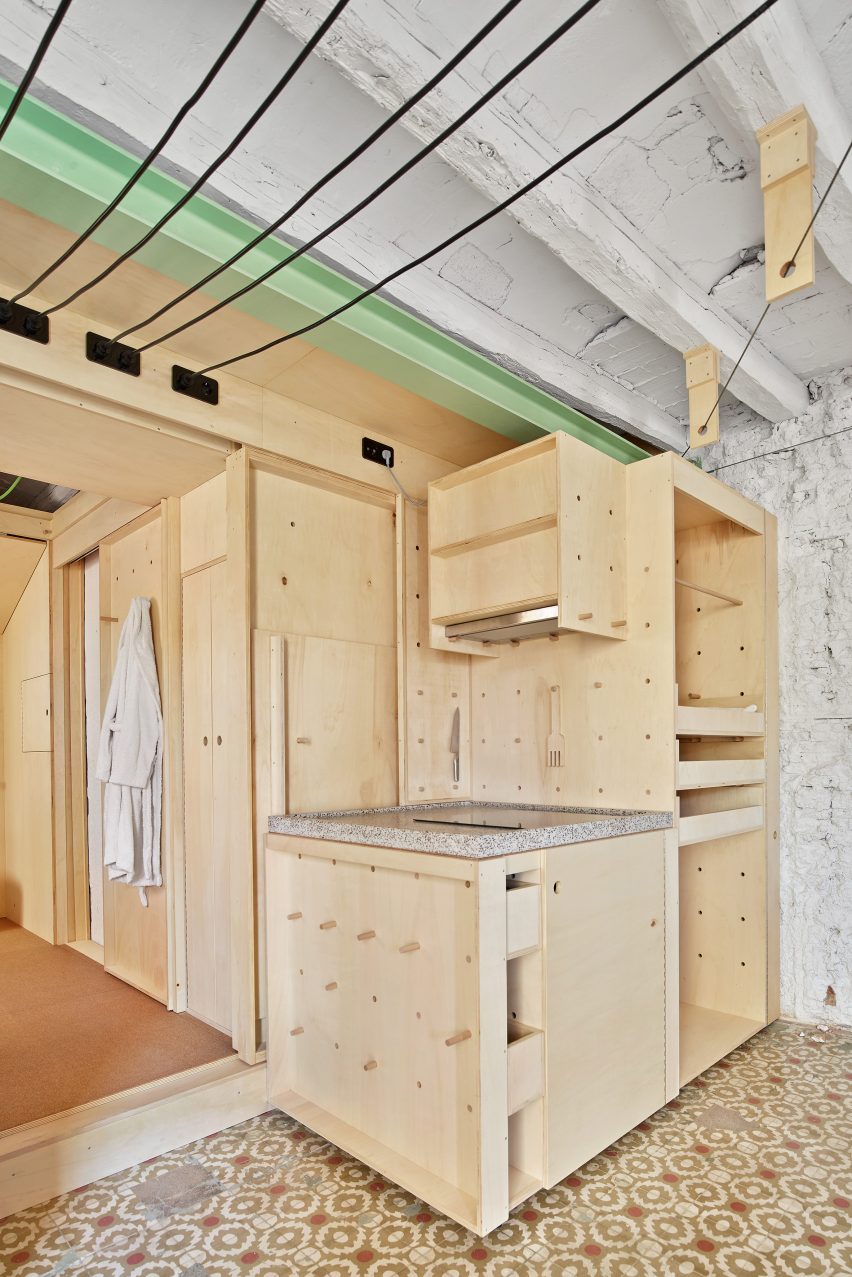 The system has been integrated on the rear wall of the Alfondac apartment. Panels have been arranged to form a toilet and shower, while a series of cupboards have been fitted to give inhabitants a place to store their personal belongings or food supplies.

A majority of surfaces are perforated with holes where pegs can be slotted in to hang utensils. 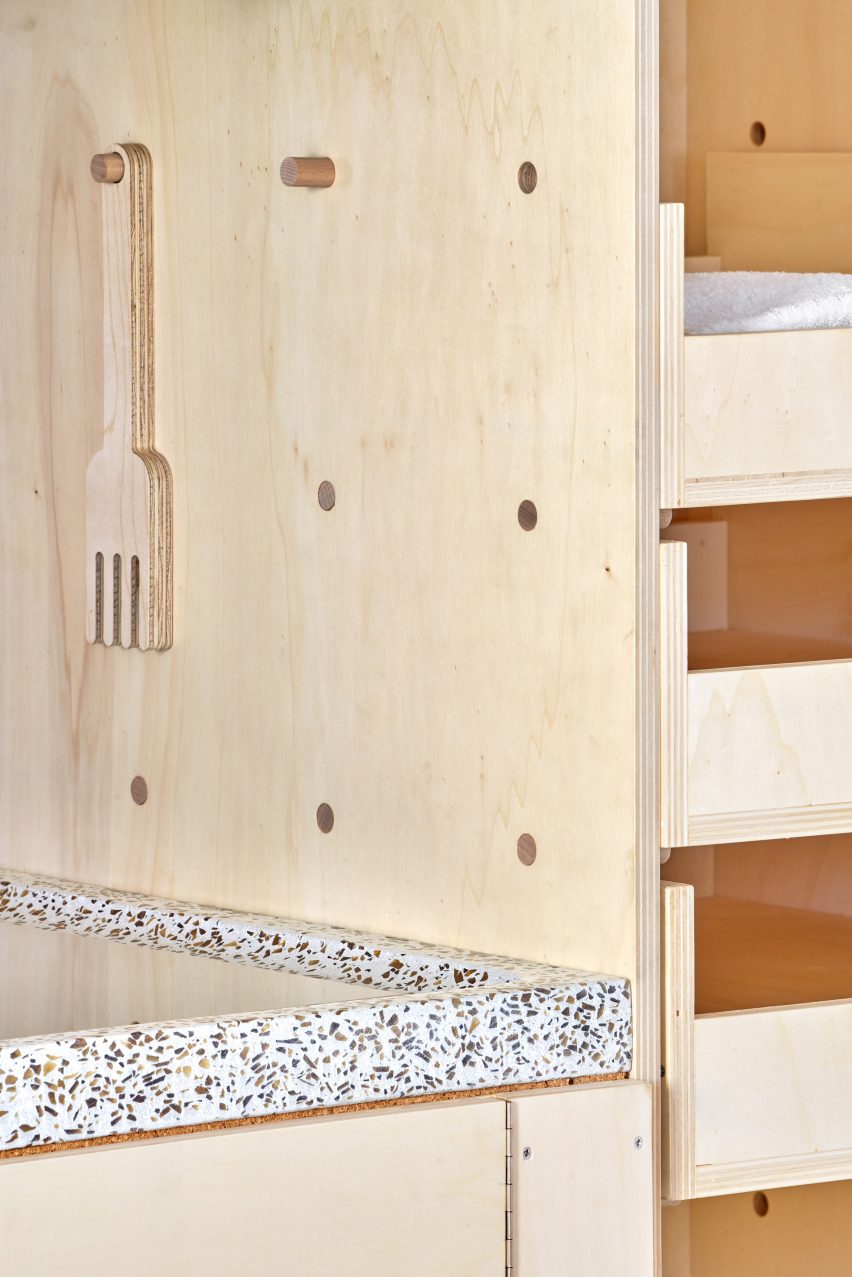 Wet areas like the sink, kitchen prep counters and base of the shower cubicle have been topped with slabs of flecked terrazzo from tile brand Huguet.

They’re each made from recycled glass and marble aggregate mixed with “green label” cement, which is meant to emit 35 per cent less carbon than standard cement. 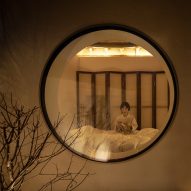 Nuwa is a micro guesthouse in Seoul with just one room

The gabled unit of the Homeful system that contains the bed has been placed towards the front of the space. 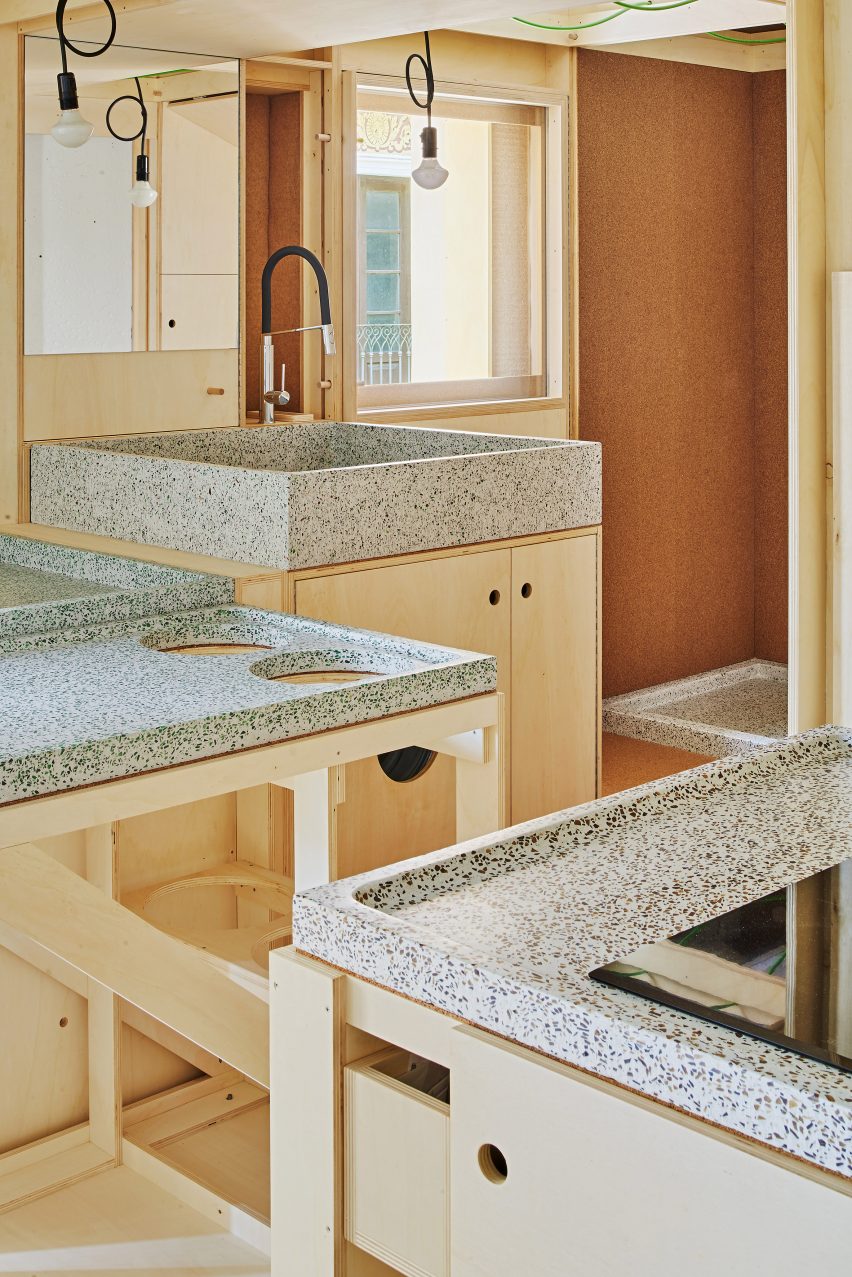 Very few changes were made to the structural shell of the Alfondac apartment. Apart from replacing the window frames, Aixopluc simply reinforced the ceiling beams and added insulation to some existing walls to minimise the need for heating.

Even the patterned-tile floor of the apartment – which is unusually 20 centimetres higher on one side of the plan than the other – has been left in its found state. 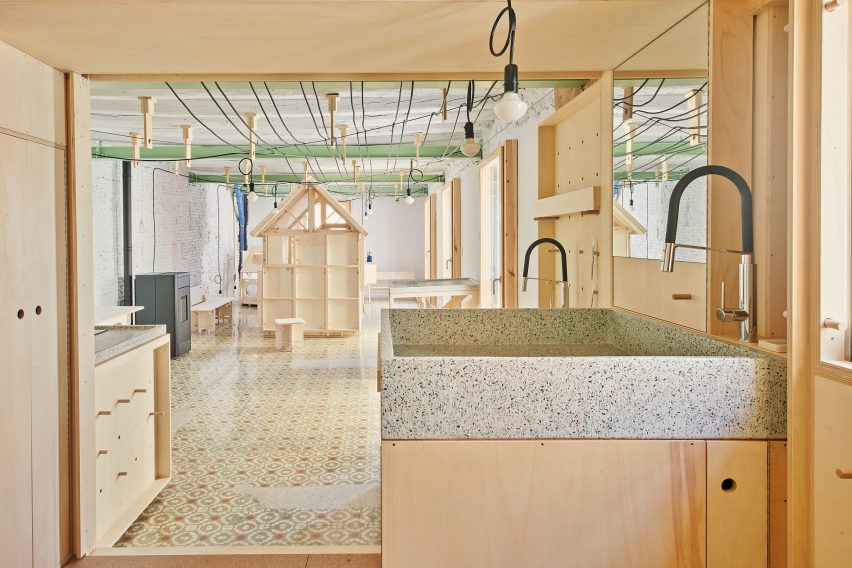 Aixopluc, which takes its name from the Catalonian word for “shelter”, was founded by architect David Tapias. It will continue to use Alfondac as a space to showcase its latest living systems but intends it to be the first of a chain of one-room hostels.

It isn’t the only practice to create a guest property that offers more than just a place to rest your head. Earlier this year, Raul Sanchez Architects used corten steel to create a guesthome-cum-art gallery in the Spanish village of La Pobla de Cérvoles.

Photography is by José Hevia.